A visit to Thedacare: A mile deep AND a mile wide – March 2015 newsletter

The Thedacare healthcare system that I visited last month was a particularly inspirational experience.

I won’t explain how the Thedacare business improvement model works because you can read about it in the book Beyond Heroes by Kim Barnas. In it she explains how the elements of the management system, developed over more than a decade, fit and work together like a jigsaw puzzle. (See also the webinar she presented here).

The jigsaw puzzle is a powerful metaphor for those of us concerned with building our own improvement systems, because until the last piece of the puzzle is put into place the whole picture cannot emerge. The incomplete jigsaw can also fall apart more easily when the missing piece is not there to fulfil its structural support function in the management system as a whole.

I’d like to share a few of my observations with you in the short time I was there.

The Thedacare true north objectives are displayed in the Thedacare boardroom and everywhere else in the organisation. On the centre of this page is a picture of ‘Lori’, a forty-something, single mother and the organisation’s quintessential customer. In this way the customer is brought right into the workplace every day.

They go further in their virtual representations of the customer. I was invited to attend the report-out presentation of an improvement team. One of the team members was a sixty-something grey-haired gentleman who introduced himself as Lori – much to the amusement of the more than 100 attending staff members. ‘Lori’ said that as a past patient it was an eye-opener to see what it takes to deliver healthcare services and ‘she’ greatly appreciated being brought into their improvement efforts.

The report-out was attended by both the past and current CEO’s of Thedacare, John Toussaint and Dean Gruner, respectively. They weren’t on the stage; they sat inconspicuously in the audience. Except of course they weren’t inconspicuous. Everyone saw their commitment to supporting the improvement work in a way that spoke much louder than any words that they could have uttered from a platform.

We are very pleased to say that John has agreed to visit South Africa and the visit is likely to be scheduled in October this year. In his current role as CEO of the Thedacare Centre for Healthcare Value he, and the team at the centre, now help other healthcare organisations to start and sustain their improvement systems. So, be sure to keep up with our special events on our website and follow us on LinkedIn, Facebook and Twitter for further developments! 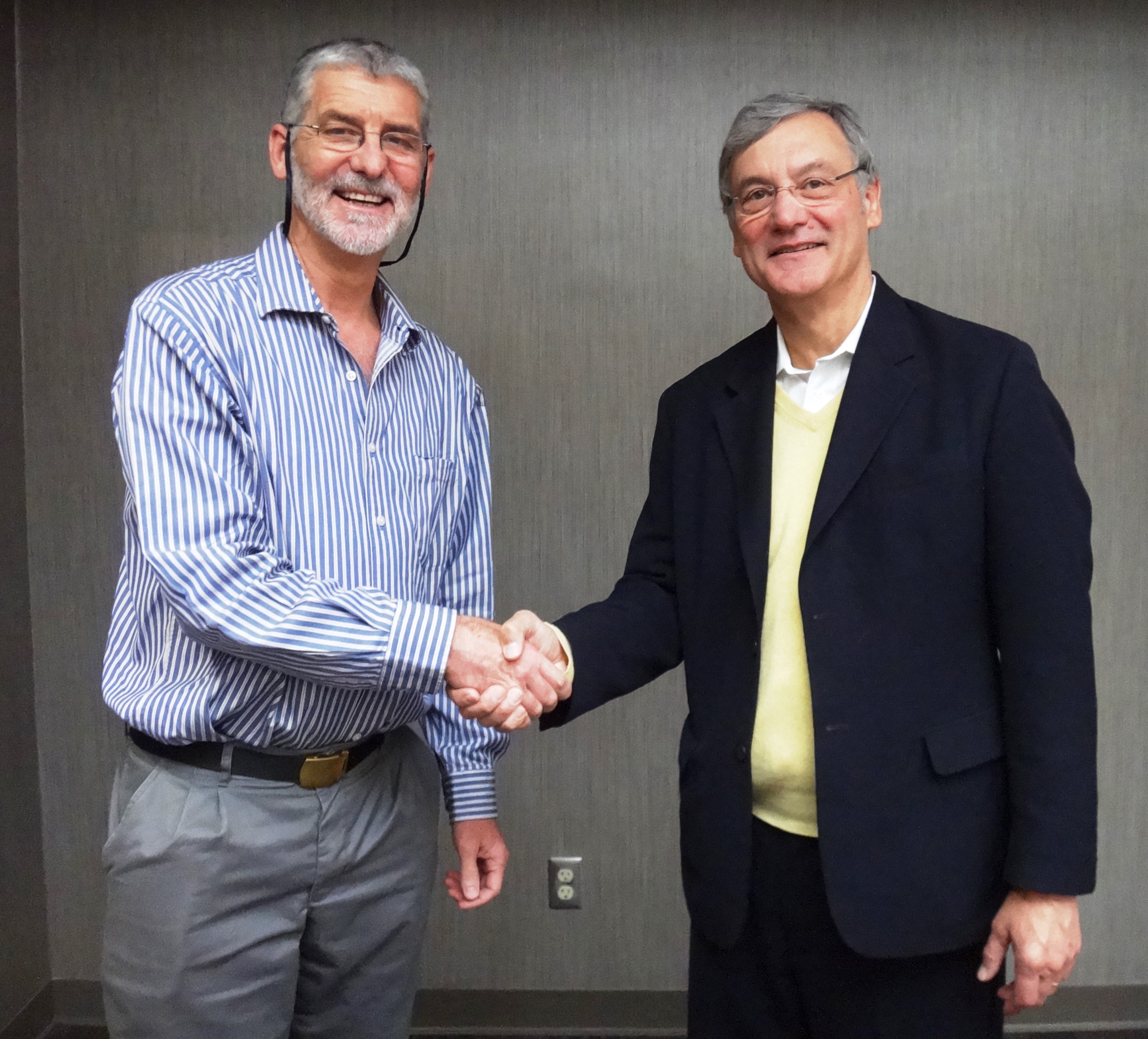 I also saw much of the same visual management, improvement tools and daily standard work practices that you would expect to see at a mature lean organisation. However, what intrigued me was what you don’t usually see, even at other advanced lean organisations that I’ve visited.

I observed an early morning daily “stat” (current status of today’s operations) meeting between a manager and front-line service delivery people that escalated up through tiered stat meetings so that managers at higher levels were aware by late morning of any significant abnormalities from the normal state of operations. By lunch time on the day I was there, a cross-functional team had been convened to address the problem (or opportunity depending on your perspective) that they had run out of capacity in the wards. This was the pull principle in action, whereby the customer is provided with what they want only when they want it, happening in real time.

Another matter of interest  was that their true north metrics were visible everywhere in the organisation. Each team had the high-level true north metrics on display, but also the measurement(s) relevant to their work that drive the high level true north performance outcomes. For example, one team displayed a graph of surgical specimen defects in support of the strategic objective to improve safety, together with a Pareto chart of the causes of the defects that was updated daily. Lots of organisations talk about connecting front-line measurements directly to strategic objectives, but few actually do it as thoroughly as we observed.

Even more interesting was that at the front-line team meeting I observed that little time was spent on reviewing the measurements. Partly, because you could clearly see from a distance whether the status was green or red, and I presume partly because all the team members were already familiar with their measurements’ trends. Instead, the team spent their time reviewing numerous improvement suggestions recorded on cards.

They first prioritised the new suggestions on a PICK chart and then stopped the meeting because their quota for implemented improvements was full and new implementations had to wait for the completion of previous implementations. The same practices were applied in the boardroom, where we were shown a parking lot of new strategic initiatives that had to wait for others to be substantially completed.

What struck me about this was how it became possible to dedicate precious time away from direct service delivery and spend more time on improvement activities rather than on tracking performance. This was because the performance measurement and monitoring system had been so deeply institutionalised at all levels of the organisations.

Of course that didn’t happen by itself. Thedacare makes big investments in maintaining their management system. They don’t do kaizen ‘events’. When a problem has been escalated to an A3 project it becomes at least a twelve week process that starts with the A3 owner meeting with the project sponsor and coach to clarify the purpose. Then current situation measurements are collected for several weeks so that when the team convenes for an intensive week of problem-solving they have real data to work with. This is followed up with measurements following implementation of improvement recommendations and Toyota Kata-style learning cycles moving towards the target, until it is reached.

Another aspect that struck me was that there is standard work for everything, even on how to operate the coffee machine. New employees are given eight weeks of induction training so that when they start working they already have the disciplines to maintain standard work. Senior management participates in assessing whether work is done according to standard, and every person I spoke to at Thedacare was fully conversant with how their lean management system works.

To cut a long story short, I came to the conclusion that lean management at Thedacare is not only a mile deep, but it has also been institutionalised a mile wide in the organisation. We can learn a great deal from the experience gained at Thedacare. I returned to South Africa greatly inspired, having seen what can be achieved if you stay the course when deploying a lean management system.