On death and dying and organisational change 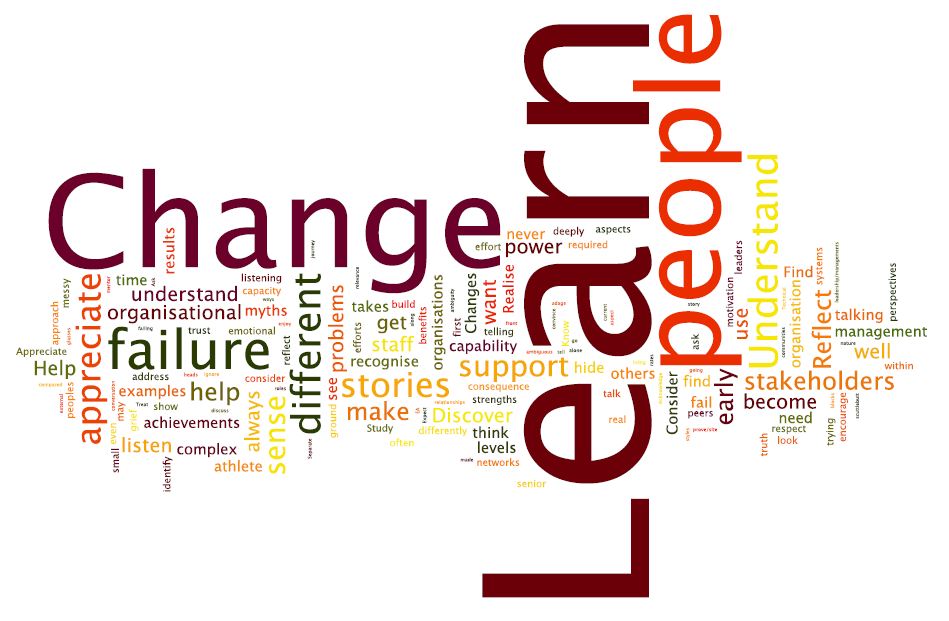 ‘Buy-in’ is a term commonly used when talking about change in the workplace. We want everyone to buy in to the change.  Often, supervisors and managers appear completely perplexed when people do not simply buy in or change their ways when told to.  Numerous books have spoken about ‘managing change’ and ‘obtaining (the elusive) buy-in’.

The lean methodology addresses some crucial aspects of ‘obtaining buy-in’,  including involving the people performing the task in the change process, empowering people to experiment with new ways, and coaching employees in problem-solving techniques.

There is a significant human factor that, if ignored, hampers sustainability of change: emotions.  In the work environment, where change is underway, these are labelled different names such as resistance, anger, or passive aggressiveness.  In this blog we will call this emotion grief.

We become emotionally attached to our routines, and our way of doing things.  And even though we might logically know that it’s not the best way to perform a task, we experience a feeling of safety and a sense of belonging within our routines.

In organisations with strict hierarchies and bureaucracies with red tape such as hospitals, those that have been around for a long time find and establish the loop holes which enable workers to get the job done based on longstanding networks and local knowledge.  Long-serving staff may view a suggested change to the way they do a well-established process as a threat. Exposing the loop holes can lead to feelings of vulnerability, frustration and anxiety about getting into trouble with management; especially within the ‘blame culture’ typically found in these bureaucracies.

Elizabeth Kubler-Ross, a psychiatrist who studied near-death situations and the emotions involved,   identified five stages of grief as a pattern of adjustment: denial, anger, bargaining, depression, and acceptance.  Each person will pass through these stages at their own rate and in their own way.  The task of a grief counsellor is to provide support during these phases.

A criticism of the model is that Kubler-Ross did not adequately take into consideration the role that the personal environment plays.  Certain environments make grieving easier.  And not everyone experiences grief in the same way, as some people are more resilient and adapt with little grieving.   Charles Corr, a social psychologist and a critic of Kubler-Ross’s work stated that grief and resilience are influenced by patient empowerment.  The more empowered the patient, the faster and better they adapt to the end of life situation. He highlighted two important aspects from Kubler-Ross’ work that I think are also true for organisational change: 1. that each person will react in their own way to the challenges that confront them, and 2. that one cannot become an effective supporter or carer unless one has learnt to actively listen to the person grieving.

How do we create an environment where employees feel empowered during the ‘death of the old ways’?  This question is particularly difficult to answer in the beginning of a lean journey, where management (and the organisation) are using traditional methods, the ‘blame culture’ is still firmly established and people have no success stories to demonstrate that the changes are in fact improvements.

I’d like to suggest though that we can better support employees during organisational transitions by preparing people for change, supporting their emotions during change and making it ok to grieve.

Grief is personal and subjective.  We can’t measure grief by comparing it to other people’s grief or phase of adjustment. We need to create an environment in which it’s safe to express emotions without judgement, where concerns are not simply dismissed, challenges ignored and what-if scenarios discarded. Emotions and feelings should not be denied when implementing change, otherwise staff will feel oppressed and devalued.

As such, I am making a case that the direct line manager is not the most appropriate person to provide emotional support during large-scale change initiatives.  The line manager is emotionally invested in the change and going through their own grief and adjustment, especially if they are confronted with challenging their beliefs on how to manage and problem-solve within their unit. They are grieving themselves.

So who should provide support then?  Could Human Resources become more involved? Is this perhaps a role for HR departments, with an understanding in lean thinking?  I’m not sure.  What I am sure of, though, is that whoever provides emotional support needs to be like a grief counsellor:  slightly removed from the actual incidence, with little emotional investment in the operational processes and ways.

Kubler-Ross: Phases of grief in organisations

Denial:  This is often expressed through statements such as, ‘We don’t have any problems in our department.’  or, ‘If only Department XYZ worked harder, faster or better, then our results would improve.’

Anger: In organisations this is expressed as passive-aggressive behaviour rather than actual aggressive outbursts.  If the not-so-obvious symptoms of this phase are not managed, the change will not be sustainable.  It’s important to support people through all the phases; however the anger phase is probably the hardest to diagnose as its symptoms may be subtle. Behaviour or symptoms of the phase include obstruction, lateral violence and bullying of others.  Other symptoms may include threatening to resign or requesting a move to another department.

Bargaining: If anger is the hardest phase to diagnose and support, then bargaining is the tipping point for change. The following remarks may be heard in this phase: ‘This is additional work, so I will make the change if you increase my salary’, ‘This is not in my job description so we need more time/resources/payment and then we will be able to follow through with this’ or ‘If this way doesn’t work, then I will leave and go work somewhere else’.  These employee responses should be carefully managed if the organisation would like to move past a point of consistent bargaining or negotiation towards sustainable change and behavioural acceptance.

Depression:  People might appear to be sulking, sullen and unhappy at work.  An important ‘sub-stage’ of depression is testing: testing the new ways and acknowledging that the new ways are not  all bad, but the employee is still not ready to openly accept it.  This is when people come to the realisation that perhaps it is not as bad as they thought.

Acceptance:  This is the ‘buy-in’ you were hoping for from the start, or acceptance of the change. 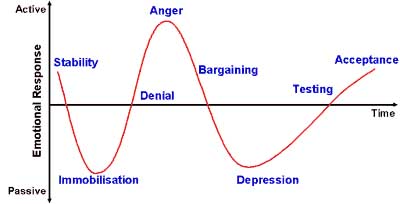 Lean organisations should strive towards resilience, a state that is at the other end of the spectrum to grief, because people feel safe, supported and are able to adapt within their environment.  This desired state of resilience takes time to attain.

The phases of grieving must be diagnosed, addressed and managed.  If this is not done appropriately it will have long-term adverse effects, including bullying or consistent bargaining to perform tasks.

Until organisations reach the point of resilience, they need to plan emotional support into the improvement process.  This emotional support should not be seen as an extension of the direct line manager’s task.  Rather it should be outside of the functional unit. This is of the utmost importance in organisations starting a large-scale lean transformation.