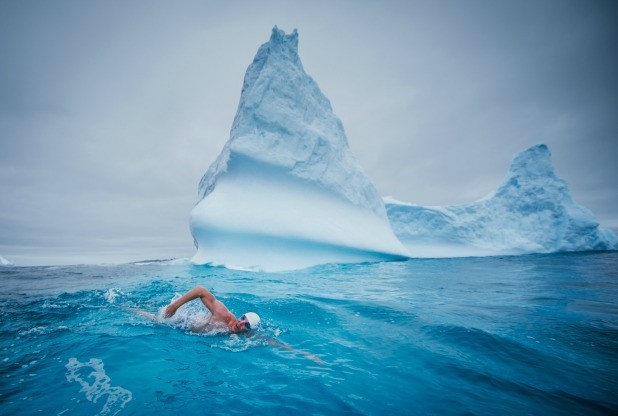 Written by Charmaine Cunningham
In 2005 Lewis Pugh undertook the world’s most southerly long-distance swim at Peterman Island in the Antarctic Peninsula at South 65⁰ latitude. Antarctica is the world’s coldest and windiest continent with more than 98% of the continent covered in ice. Blizzards are common and it can result in a white-out. Lewis swam wearing only a speedo, swimming cap and goggles as dictated by the rules of the English Channel Swimming Association. This does not sound like a pleasant swim.

The swim was part of a scientific study into ‘anticipatory thermogenesis.’ Prof T. Noakes and the research team could describe this conditioned response after this Antarctic, and two other polar swims. Lewis has an ability to swim in icy water due to an ability to generate heat in anticipation of the cold water. This response is developed by rigorous training and exposure to cold water. He can, through mental preparation, raise his body temperature by 1.4⁰ C of his normal body temperature, prior to exposure to cold water.

Immense preparation went into this swim. An early challenge was to find water cold enough to train in. They calculated that if they used a small inflatable pool they would need one and half tons of ice per training session to reduce water temperatures sufficiently. After negotiations, they used the deep water trawling division of I&J’s ice-making machines. They trained every afternoon for weeks prior to the swim, progressively lowering the water temperatures.

Pugh describes the day of the swim in his book 21 Yaks and a speedo as ‘grey, with ominous looking clouds.’ The halfway mark was an iceberg. The water measured 0⁰ C, with an outside temperature of minus 2⁰ C. (Due to the salt content in the water, the freezing point in Antarctica is approximately -2⁰ C). An additional person had to keep Rolex watch for leopard seals, to prevent attacks. 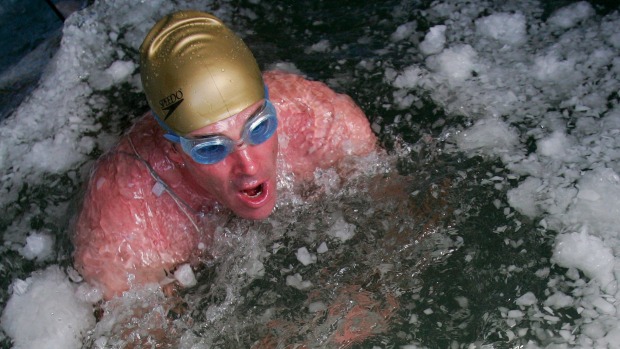 The go ahead for the swim was given. The final preparation before Pugh plunged into the icy water was vital; the transition from being clothed to entering the water in just a speedo had to be seamless. No time could be wasted, ensuring limited exposure to the cold external temperatures. The process went well, executed exactly the way that they had practised for weeks.

Halfway into the swim, it started snowing and then suddenly a snowstorm hit, but Pugh continued swimming. It was so cold that the pen, used to record key information regarding the swim, froze. He completed the 1 kilometre swim in 18 minutes. Not only had he just completed another record-breaking, and very dangerous swim, but everything had gone well.

And then…the unfortunate news dawned on the team…. In the rush to execute the seamless transition into the icy water, they had forgotten to strap a watch onto Pugh, which would have recorded vital information. Without it, the scientific study was incomplete.

How could this happen? What went wrong?

No task allocation. No checklist.

No-one had been assigned the key task of ensuring that Pugh was wearing the watch, either in training sessions or on the day of the Antarctic swim. During the training sessions, the person responsible varied. Added to this, there was no checklist to ensure that all the steps were followed. They have since learnt from these mistakes.

What can we learn from this mistake, particularly as it relates to healthcare?
• Often in meetings, tasks and actions are raised but not assigned to a specific person. The only way to make sure that tasks are executed is to assign a person and a target date. An example could be in healthcare facilities, where daily tasks are allocated. Should the tasks not be allocated, it could compromise patient care and safety. An example of such a daily task is the checking of emergency equipment in all hospital departments. If a task is not allocated or not executed, it could compromise patient care and safety.
• It has been demonstrated that one of the critical success factors in emergency response situations is a clear awareness of responsibilities. This indicates task allocation.
• By using visual means to allocate tasks such as a whiteboard or checklists, people can remain focused on priority tasks. This is especially important in an environment with multiple tasks and distractions at the same time.
• The WHO surgical checklist demonstrated a drop in mortality by using a simple checklist. When Atul Gawande and his team tested the concept in 2008 the results were overwhelming. Complications for surgical patients in all eight hospitals participating in the study fell by 36%, deaths fell by 47%. They followed up on this with a survey to the staff that used the checklist. Probably the most important question in the survey was: “If you were having an operation, would you want the checklist to be used?” 93% of staff answered “yes”.

In summary, checklists and task allocations are cognitive aids that should be used to avoid mistakes, errors, omissions and harm to patients. The value of checklists has been replicated in numerous settings and at numerous times. A successful South African campaign where checklists have been applied is the Best Care Always campaign. Read more about Best Care Always at www.bestcare.org.za

On another note, Lewis Pugh is doing amazing work as an activist for our oceans and I would recommend some reading on his mission and achievements at www.lewispugh.com

Introduction to Lean Workshop
Learn more about the importance of standard work and mistake-proofing (poka yoke), of which checklists and task allocation are a part, at our Introduction to Lean workshop. Understanding comes from doing.  So this introductory course tells you ‘about’ lean but also uses repeated cycles of an experiential learning game to allow understanding to develop.  The workshop is designed for participants from all backgrounds, manufacturing, services, or government, to learn the basic principles, tools and practices of lean management.